Titans is a upcoming live action series based on the DC Comics known as Titans. The show is set to premiere on the newly announced DC digital service set for launch in late 2018.  Akiva Goldsman who served as an executive producer on recent films you may have seen such as King Arthur:Legend Of The Sword, Transformers:The Last Knight will also be serving as one of the executive producers, along with Geoff Johns who is known by many as the chief creative officer of DC Comics, and Greg Berlanti who is a writer, producer, and is known by many as the overseer of the CW’s Arrowverse shows such as Arrow, The Flash, Legends Of Tomorrow, and Black Lightning.

In this article I’ll be going into reasons why this show can end up being DC’s next big hit, what characters could possibly appear that you may have always wanted to see a live action adaptation of, and what storylines the show can possibly adapt from the comics.

I believe this series can be DC’s Next big hit because the amount of things this show has going for it are through the roof! Starting off with my first reason:

It’s based off of one of the most popular superhero teams ever known:

Titans and Teen Titans is a group of superheroes that many fans around the world have grown to know over the course of their childhood. Some people even grew to know these characters even better than the Justice League. The show is confirmed to have not only the boy wonder many know as Robin, but also other fan favorites such as Starfire, Raven, and Beast boy. These characters first premiered on the animated television series TeenTitans, and back in the day this show was one of cartoon network’s most popular shows and had a run of 5 seasons and film that ended back in 2006. The show is beloved by many so much that fans in the past have been created multiple petitions asking for a new season of the series. The show followed robin as the leader who tried to find his own path aside from batman, and we got to see not only great character development with just robin, but also the entire team as well. It had great humor that made you love the characters every time an episode premiered on tv, and in the end it did justice to the characters that kept many fans very happy in the end. Because of how popular and well known Teen Titans is amongst fans, Titans already has a fan base behind just based off of that.

Some of the best characters in comics:

Another thing this show has going for it is its characters. The show is said to be centered around a young group of superheroes led by Dick Grayson played by Brenton Thwaites who many know as the first robin that Batman trained and also his protege. Dick Grayson is a favorite amongst mainly because compared to the other robins batman has trained, Dick Grayson is the only one that hasn’t seemed to truly lose his way. He also shares a lot of similarities to batman as well giving the fact that his parents was also killed in a tragic accident right in front of him when performing an acrobatic act in a circus which was later revealed to not be accident due to the owner refusing to pay protection money to the crime lord known as Tony Zucco. Giving all this, Bruce Wayne and Dick Grayson both share a similar accident which is, both their parents were killed by criminals right in front of them. The difference between the two is that, bruce decides to take on the mantle fight crime through vengeance, while Dick doesn’t allow his anger to motivate him to fight crime. Instead he has a much more optimistic side than Bruce does and is one of the reasons why Bruce Wayne looks at Dick Grayson as not just a protege but as a first son as well. 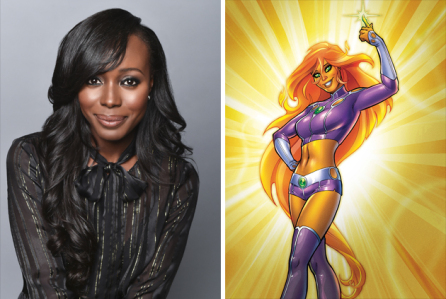 Titans will be Starfire’s first ever live action appearance on screen and will be played by the beautiful and talented Anna Diop. Up until now, starfire’s only real appearance on television has been through the animated tv series Teen Titans and also the animated film Teen Titans: Judas Contract. Starfire is an alien from the planet Tamaran and is the also known on her planet as a princess. She was set up for execution by the doing of her sister known to be Blackfire who was crippled in her childhood preventing her from gaining the same powers as her sister which later leads her to have jealousy and hate for her sister. Starfire later escaped crashing onto earth which bought her into contact with Robin and the rest of the team. Starfire is known by many as not only extremely beautiful, but is also known to be loving and caring to everything and everyone around her similar to Wonder Woman in a lot of ways. She can also use ultraviolet energy that she can convert into flight energy along with possessing super strength. She is known to have a romantic relationship with Dick Grayson in the comics. I’m sure Anna Diop is going to deliver a great performance for the character, and I can’t wait to see the character on screen.

Beast Boy also known as Garfield Logan played by Ryan Potter is already known to be a fan favorite amongst the fans just based on the fact that he’s known to be the fun loving chill member of the group. Just like Starfire, this will be beast boy’s first ever appearance on screen, and the anticipation for this character is at a new high for many fans considering how the love many fans share for this character. When Garfield was younger he was injured in an animal attack resulting in him contracting a serious and almost fatal illness. His parents injected him with a untested serum that ends up giving him green skin and hair and also the ability to change into any member of the animal kingdom. Even after all of that, he was held captive amongst several other young metahumans by an organization known as N.O.W.H.E.R.E. This organization forced beast boy and many other metahumans to participate in a Culling tournament where metahumans had to fight for their lives, and because of this, beast boy is a vital member of the group due to not only his ability to shape shift at will, but also his sharp intellect and survival skills as well. I for one can’t wait to see this character debut on screen and I know many fans can’t wait either.

Raven along with Beast Boy and Starfire, will be having her first live action debut on Titans as well, and will be played by the upcoming actress Teagan Croft. Raven is not only another fan favorite amongst fans, but also one of the most powerful characters in the DC Universe. She is known to be the daughter of the powerful demon Trigon who is sometimes referred to as the devil himself. Raven is from a realm called Azarath that exists between the planes of known reality, and is later forced to leave her home due to the unfortunate connection she has with her father. Raven is known as a powerful sorceress and possesses abilities such as teleportation, flight, telekinesis and and being able to leave her body and use her soul self to engage in combat. Being the daughter of Trigon causes raven to isolate herself from everyone until she meets the titans who eventually take her in and accept her for who she is. Being a titan member she eventually learns to control her abilities and become a hero in her own right. I’m sure Teagan Croft is going to be great and seeing the journey of her character through the series will be exciting to see.

What Stories the show can adapt in the future:

The Terror Of Trigon:

The story of raven’s existence and her connection with her father Trigon is a famous story that has been adapted on the animated television show Teen Titans and the animated movie Justice League vs. Teen Titans. This is a storyline that will most probably come into play at some point during the series, but giving the fact that the show will be live action will allow this show to go even deeper into the story where raven is from and who Trigon is as a whole. Going deep into the mythology of the realm Azarath, will allow viewers new and old to learn more about that world and come to an understanding of why Raven is one of the most powerful characters in DC Comics. 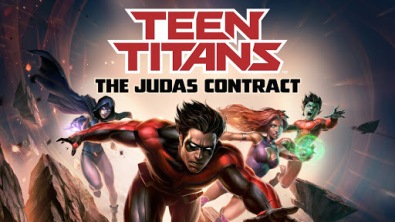 Judas Contract  is a fantastic story that not only goes deep into Deathstroke’s hate for the titans but also it gives more information on a new member of the titans Terra. Terra is a titan member that originally worked as a spy for deathstroke to help take down the titans. Terra is a metahuman that has the ability to control and manipulate the earth at will and is known to be one of the most strongest foes the titans has ever faced. Having this storyline adapted on the Titans show will bring a long awaited battle many fans have wanted to see for years between the Titans and Deathstroke, and also it can serve as a first ever live action appearance for the character Terra herself. In fact, this storyline can be used for an entire season on Titans and give writers the chance to do things they may not were able to do on other platforms.

Red X isn’t a comic book storyline and was originally made for the animated show Teen Titans. Red X is an identity that robin takes on due to his obsession with wanting to take down Deathstroke. One of the reasons this storyline could be cool to see on screen is because sometime later after robin retires from the Red X persona, another individual steels the costume takes on the mantle and himself. In the show, the identity of this individual is never revealed. Seeing this storyline done live action could be interesting because it introduces us to a new character not even in the comics and can it allows us to see what makes robin such a great leader as a result. Seeing him fix the mistakes of his past and learning to work with a team can be a cool storyline that can be used to push him to become nightwing at the end of the storyline if possible. This story has a lot of potential and I would love to see it adapted on screen one day.

That’s it for this article. I hope you all enjoyed reading my thoughts and hopefully I was able to excite you more for the upcoming series Titans and the characters involved. Titans is the superhero team I grew up watching and reading when I was younger more than Justice League, so my excitement for this show is at a high. Again, I hope you all enjoyed the article and if you want to know more about this show, check out the links below.