Halloween is directed and written by David Gordon Green and co-written with Danny McBride. The film stars many great talented actors such as: Jamie Lee Curtis, Judy Greer, Andi Matichak, Will Patton, Virginia Gardner, and Nick Castle.
I really loved the story David Gordon Green and Danny Mcbride created for the movie. This is an excellent follow up to the already amazing 1978 horror classic Halloween directed by John Carpenter, and truly does justice to the franchise fans have been waiting for since the original film. It honors everything John Carpenter did with the very first movie, but also is able to stand completely on its own and is a great time for not just original hardcore fans, but also newcomers who aren’t too familiar with the franchise.
The film does an amazing job delving deep into the raw trauma that Laurie Strode has had to deal with her whole life. You feel how damaging that horrifying night has had on her, and on top of that you also see what kind of effects her paranoia has had on the rest of her family. Each character whether it’s Laurie, Karen, or Allyson, are shown to have a different way of dealing with this trauma. We see how heart-breaking it is for each of them, and how divided they’ve become due to this tragedy.

This film really brings back the feeling from the first film which is what it’s like to have a psycho maniac who has no concrete reasoning for their actions, and is solely and purely evil. The fact that there is little to no explanation as to why Michael Myers continues these brutal attacks is what truly makes him terrifying and sets him apart from other horror icons such as Freddy or Jason. Jason just kills anyone that enters Crystal Lake, and Freddy wants to kill every child on Elm Street out of revenge, but Michael is different. What makes Michael Myers so horrifying is that he doesn’t need a thousand different mythologies to explain who he is, and why he does what he does. It’s the feeling of not knowing that makes him scary. People fear what they don’t understand, and that is why Michael Myers is so effective to the audience and why fans continue to support this franchise.
I was surprised with how funny this film was as well. Don’t get me wrong. I love horror films that are able to keep up the tension and stay as dark as possible, but a little comedy doesn’t hurt anyone. If anything, it makes the characters feel more human and realistic, and that is another thing this story did very well. Two characters I think sold it on the comedy was Vicky played by Virginia Gardner and Julian played by Jibrail Nantambu who Vicky babysits early on in the movie.

Both actors shared amazing chemistry on screen and their banter back and forth created levity that I believe the film benefited from. You care for these characters once things start to eventually take a dark turn, and part of the reason for that is due to how honest and real the relationship Vicky and Julian had in the film. I personally loved these two on screen, and I wish we had got more scenes with them. They were great in this movie.
No character feels out of place and everyone was given a part that was integral to the overall story, and it was bought together beautifully. The acting was solid, and was very well done. David Gordon Green did an excellent job as director and bringing together this amazing talented cast. That brings me to the next part of this review which is the performances.
Karen Strode played Judy Greer: 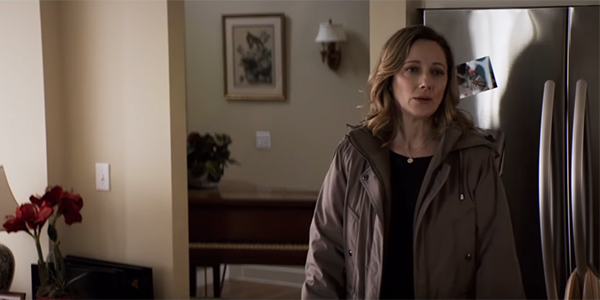 Judy Greer who plays Karen Strode does a great job as Laurie’s daughter and showcases what it’s like for a child to have to unfortunately take on the aftermath effects of a parent that is still traumatized from a horrifying night. We see Karen who has been damaged from the paranoia her mother has instilled into her, try to rebuild her life and create a normal sane environment for her daughter Allyson. Not wanting Allyson to go through those same events she herself had to go through when she was a child. It’s honestly understandable why she’s so protective and why she has such an estranged relationship with her mother Laurie. Judy Greer is great in this role, and I always love seeing her on screen.
Allyson Storde played by Andi Matichak:

Andi Matichak is probably one of my favorite parts of this movie. The similarities Allyson shares with Laurie Strode was nostalgic, and bought back memories of who Laurie use to be when she was Allyson’s age. Andi Matichak really nails this role, and brings a real pure-hearted innocence to the character Allyson that makes you feel an emotional attachment to her throughout the film. She’s trying to reach out to her grandmother who she feels a deep connection to, and wants to develop a strong relationship with her as a way to get closer with her and understand her struggle due to how divided their family has become over the years. I really hope we get to see her take on an even more dominant role in future sequels. She was great! I would love to see this character make a return to the franchise.
Laurie Strode played by Jamie Lee Curtis:

Jamie Lee Curtis makes a return to the franchise as Laurie Strode, and hands down she is my favorite part of the movie. The performance Jamie Lee Curtis brings to this role is raw, powerful, and deeply emotional. This time as Laurie she is shown to be a protective mother who has been preparing for war against Michael Myers for 40 years. She has become a hunter, and has set out on a path to do whatever it takes to end her nightmare once and for all. Trust me when I say you’ll love what Jamie Lee Curtis brings to the role of Laurie Strode this time around. It’s almost a reminisce of Sarah Conner’s evolution from Terminator 1 to Terminator 2. A mother that understands the true horrors of the world, and is doing their best to prepare their family for the worst. This is definitely one of her best performances I’ve seen, and Jamie reminds all of us why she is the number one scream queen of the horror genre. She’s earned it.
Nick Castle as The Shape:

Nick Castle also makes a return the franchise as Michael Myers otherwise known as the shape. Nick Castle is just as phenomenal as he was the first time we saw him in the original Halloween. The energy he brings to this role is fantastic, and reminds us fans old and new why Michael Myers might be the best horror icon of all time. Seeing Nick Castle make a return to this role after 40 years was something I really appreciated, and the performance he brings to this role was not only haunting, but effective, and that’s exactly the kind of terrifying presence that was needed for this role in order for this movie to work.
The Music:

The music really is a character in itself. What John Carpenter, Cody Carpenter, and Daniel Davies was able to accomplish with this soundtrack is jaw dropping. It surpasses the original soundtrack from the 1978 film, and is in a class of its own. It reminds me so much of an 80s soundtrack, but still feels very modern,  and amplifies the original themes from previous films to a whole new level. This is without a doubt one of my favorite soundtracks of the year! It’s incredibly well done, and it does it’s job being completely in sync with the dark tone this film has set for itself. I love this soundtrack. I’m more than proud with the work John Carpenter has done, and I get chills listening to it. If you haven’t checked it out yet I recommend you do. Here’s the link where you can listen to the full soundtrack below:
Halloween Movie 2018 Soundtrack:
https://m.youtube.com/watch?v=3RRWP1yQsU4&t=460s
Final Thoughts:

Overall, Halloween was just an all around great scare, and really does its job as not just a sequel to a beloved classic, but also stands on its own completely. David Gordon Green created something both old and new fans can enjoy and talk about for years to come. I really loved this movie, and it is one of my favorite films of the year. Let me know what you all thought of this review, and have you seen the movie? Tell us your thoughts by sending us a message on our Facebook or Twitter page. Thanks for reading, and enjoy the rest of your day.