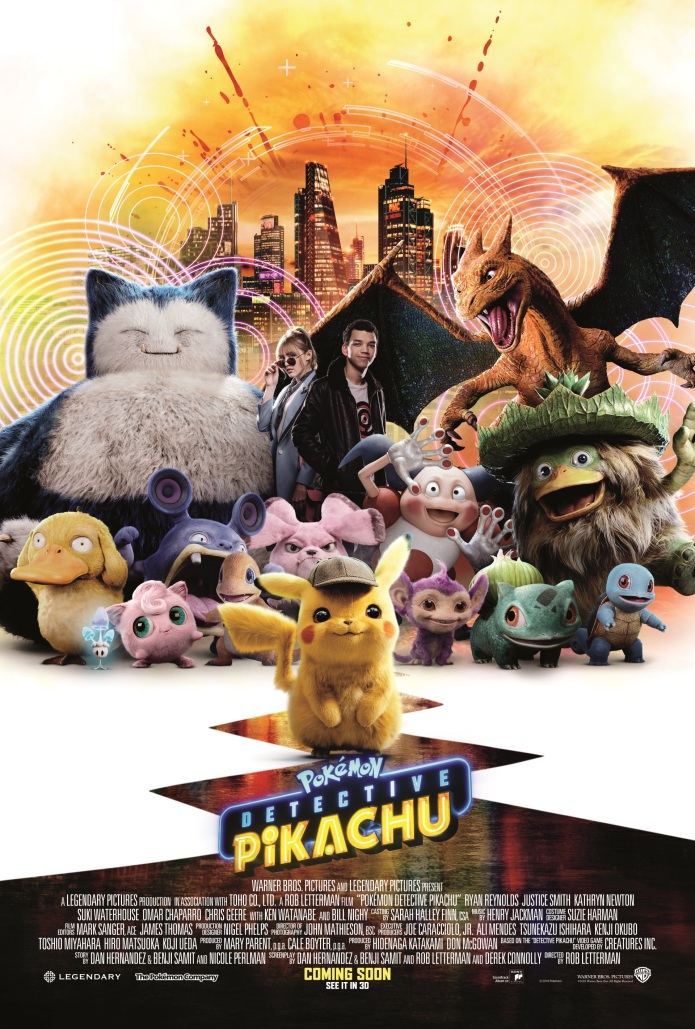 Detective Pikachu is an inspiring & heart-warming adaptation of the beloved Pokemon franchise which has been a worldwide phenomenon for over 2 decades. Directed by Rob Letterman & written by Dan Hernandez & Ben Samit, we’re dropped into a whole new never before seen cinematic universe. Pokemon has been something I’ve cherished since I first played the original games titled Pokemon Red & Pokemon Blue released back in 1998. In fact I was so obsessed with Pokemon that I remember only having Pokemon games for my handheld Gameboy SP when I was younger, & nothing else. So many long time fans including myself have grown up with this franchise, & never believed a live action film would happen let alone be possible. So if you’re someone who’s new to all this, you can maybe start to understand why there is so much hype surrounding this movie.

We start our story off seeing a group of scientists in an abandoned facility performing an experiment on the legendary man-made Pokemon known as Mewtwo which is cloned from the remains of its ancient descendant known as Mew. As expected, things start to go awry, & Mewtwo ends up breaking out of the lab & destroying the facility all together out of anger for being kept in captivity for so long.

Detective Harry Goodman played by Ryan Reynolds manages to escape the facility before it’s destruction, but is later caught in an accident which looks to be caused by Mewtwo leading to his eventual disappearance.

Some time passes, & the story opens up to our main protagonist Tim Goodman son of Harry Goodman played by Justice Smith who when we’re first introduced to him, doesn’t want to have anything to do with Pokemon at all, but is pushed to go out of his comfort zone by his childhood friend Jack played by Karen Soni to catch a wild Cubone as an attempt to help him open up more after the passing of his mother, along with a falling out with his father, & hopefully start a journey as a Pokemon Trainer. This leads to be unsuccessful, & it’s later revealed that Jack plans on leaving their hometown to now go on his own journey & along with Detective Hideo Yoshida played by Ken Watanabe tries to encourage Tim to do the same.

Justice Smith most notably known for his work on the hit Netflix series The Get Down & the most recent installment of the Jurassic Park film franchise Jurassic World: Fallen Kingdom, does a wonderful job leading this movie. He’s able to bring a really cool timid, & at times chill personality to the character Tim, & effortlessly makes for a very likable protagonist. You feel for him as you learn more about the tragedy he’s been through, & begin to realize just how lost he is until he meets Lucy(Kathryn Newton) & Pikachu later on in the film. As we follow him on his journey we see him rediscover himself, & find a true purpose in who is, & what he wants to be. Justice Smith is another great addition to this cast, & honestly continues to show us just how good of an actor he really is, & will leave you with a more than satisfying performance, & I have no doubt we’ll see more of this actor in the future as well. 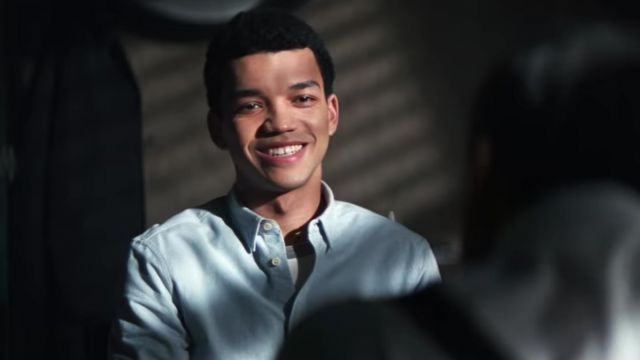 Tim is later called by the police concerning the earlier accident with his father leading him to believe he’s passed away. This news breaks Tim’s heart, and causes him to isolate himself from everyone. As he makes his way to his apartment, he’s met by a mysterious young woman known by the name Lucy Stevens played by Kathryn Newton who many of you may know from HBO’s hit show Big Little Lies, and 2018’s critical success comedy film Blockers. 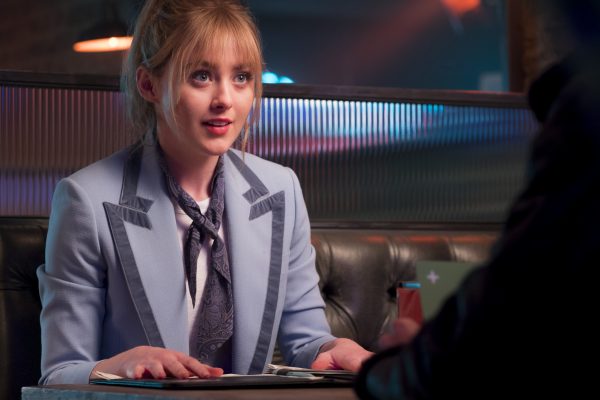 Kathryn Newton brings so much positive energy to this character, that she honestly radiates the room whenever she’s on screen, & you can’t help but fall in love with her charm, witty, & bright personality that honestly comes off very warm & inviting as you follow her through this grand adventure with Tim & Pikachu. Newton is hands down one of the biggest highlights of this movie, & I hope we see more of her in future installments going forward because she really does an incredible job making you feel for a moment like you’re truly a part of this new world as we watch this story unfold. Rob Letterman made the right choice casting her in this role, & once you’ve seen the film yourself you’ll understand why. Most definitely a rising star in the making, & I’m always left excited about any project she does because she’s really that talented.

Lucy Stevens is a news reporter for CNM in Ryme City investigating the whereabouts of Tim’s father Harry Goodman, & approaches Tim in attempt to help her solve the case, & find out what really happened the night of Mewtwo’s escape.

Tim of course ignores her at first, & heads home only to be met by a Pikachu which is later revealed to be Harry Goodman’s partner Pokemon, & on top of that can now communicate with him.

The two are later met by the founder of Ryme City himself Howard Clifford played by Bill Nighy, & during their encounter explains to them that Harry Goodman’s disappearance was no accident and they must find Mewtwo if they are ever to find out what led to the tragedy of that night.

Billy Nighy as expected also gives an amazing performance as Howard Clifford throughout, & is able to display a man that’s genuinely in mourning after the loss of his dear friend Harry Goodman, but then manages to give a complete switch in character showing off a very menacing behavior that in the third act makes for a more than decent antagonist that’s become obsessed & psychotic with his work over the years prior to the start of this film, & is willing to do in his mind whatever it takes to accomplish his goals. Billy Nighy is always a pleasant surprise to see on screen, & is a welcoming asset to any film he’s in especially this one. Great actor through & through.

Pikachu & Tim later decide to partner up together along with the news reporter Lucy Stevens who we we’re introduced to earlier to help save Tim’s father, & throughout the course of their journey they’re met with some insane obstacles such as facing off against an army of Greninjas that were held in the same facility Mewtwo was experimented on and later is forced to outrun moving mountains revealed to be gigantic Torterras also experimented on in the same abandoned Facility Tim’s father escaped before his disappearance.

Pikachu ends up hurt during all this, & Tim is lead into the forest by a pack of Bulbasaurs to a mysterious location in attempt to save him. Only to be caught by the surprise of Mewtwo itself which saves Pikachu from his wounds, and is once again caught by the same scientists that held him prisoner in the beginning of the film.

Tim reaches out to Clifford about his findings and is later shocked by the revelation that Clifford was behind everything including the disappearance of Harry Goodman. His plan all along wanting to combine the human mind & Pokemon mind as one, & later ends up enacting this very plan using a machine that allows him to fuse his mind with Mewtwo’s as to what he calls the next step in human evolution, & then proceeds to perform the same act on the entire city.

Tim & Pikachu are left up to the task to stop Clifford, & reverse the damage he’s done before it’s too late. They end up defeating Clifford by destroying his machine, & reverting everyone back to their original bodies once again.

Mewtwo ends up granting Tim & Pikachu the answers they’ve been seeking their whole journey together throughout the course of the film, & reveals to us Harry’s mind was transferred into Pikachu as a way to save his life from the accident. Mewtwo reverses the affects giving Harry Goodman his body back, & The film ends with Tim & Harry finally having a heart to heart moment with each other as Father & son, leading Tim to make the decision to become a detective just like his dad.

Detective Pikachu gives us a solid straight forward story centrally focused on the message of how not isolating from the rest of the world, & opening up to new people can allow you the chance to rediscover yourself, & help you realize what you’re capable of once you begin to finally commit yourself to a goal you’re passionate about.

Ryan Reynolds voices Pikachu & does a very good job bringing the iconic Pokemon to life, & never once misses a beat with the comedic humor that is absolutely needed in this film due to the tragedy surrounding Tim Goodman. A true comedic relief, but also an incredible co-lead & his chemistry with the entire cast is almost infectious as you see just how well they all manage to play off of each other in this movie. Letterman couldn’t have found a better actor than Ryan Reynolds for this role, & I’m truly happy & satisfied with the performance he gives us throughout this movie. A true delight to watch on screen from beginning to end.

Overall, I had a great time with this movie, & left shocked on how faithful it was to the source material. It’s welcoming to newcomers just as much as it is older fans, definitely a film you want to take kids to, & opens the door to possibly an even bigger cinematic universe for the future. Even if you’re someone who’s not really familiar with the franchise, you may end up finding yourself a fan once you’ve seen this film. Give it a chance and decide for yourself where you stand on it. This movie is not just a first good attempt to a live action Pokemon movie, but also may very well be our best video game adaptation on screen yet! I give Detective Pikachu a solid A!

That’s the end of my spoiler review. Hope you enjoyed it. Have you seen the film yet? If so, send us a Tweet or message on our Facebook or Twitter pages @earth2ComicCast or @Tweet_JVS letting us know your thoughts. We’d love to hear them. Until next time, have a great day everyone!